If you visited my blog for the Inspired by Winter blog hop a few weeks ago you will know that the piece I made was almost forced out under the immense pressure of that enemy of all artistic types; the dreaded  Creative Block.  It had laid its weighty hands upon me for the whole of January, and I didn't make a single thing, what a horridly stifling feeling!

I am glad to say that creative block has now released my little cat shaped muse (my muse is definitely a cat, the fickle thing) from his constrictive grasp and I have been purred back into productivity!

The movement began quite small, with a couple of very basic earring I made for a couple of events I was going to:

I then put together a fairly simple earthy necklace as a gift for a friend who is currently living in Germany.  The awesome owl pendant is from Natalie McKenna of Grubbi:

I also completed a gift for my Mum, which she has been waiting for since Christmas!!!  To make up for the delay I'm going to take my new collection of Bo Hulley components to hers later so she can pick one out for her next pressie :)

Last but not least here is something new I tried.  I've been admiring pieces on Etsy and Pinterest that are built around a shaped and wrapped 'yoke' made out of heavy gauge wire and adorned with plenty of dangly bits (I love dangly bits :).  So I decided to give it a go.  The results aren't perfect but I'm pretty darn pleased with this, it is very very dangly: 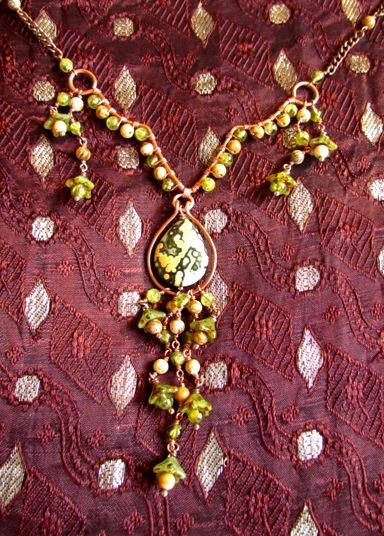 This was actually the second one I made in this style.  Unfortunately I left the first one at a friends house last night!  I'll have to recover it and photograph it at some point soon.

I have a couple of other pieces on the go as well.  I've been experimenting with new wire techniques, and have also purchased some waxed linen cord from The Curious Bead Shop to try my hand at knotting.  I definitely need some new tools, some mandrels (a candle stick does not make a great substitution), some round nose pliers that are actually round and flush cutters that are actually flush would be good start I think.  And then I think I'll try sawing.  And riveting.  And soldering. And stamping.  And any other technique I happen to stumble across in the vastness of the Interweb.